Ansley Fricks, the daughter of Brandon & Lindsay Fricks, won the junior one division in Talent Contest at the SCFB State Convention. She entertained the audience with a lyrical dance.

Clay and Emily Alexander, from Starr, were appointed to the State Young Farmers & Ranchers Committee. 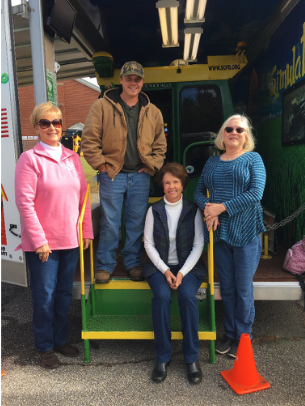 The local office donated $1000 in support of a campaign run by the Calhoun County Sheriff’s Department. Their “No-Shave November” campaign begins with the deputies growing out their Santa beards in anticipation of delivering toys to less fortunate families in the county.

Statewide more than $40,500 was donated through Farm Bureau Cares to assist charities and countless individuals this holiday season.

YF&R donated milk for Harvest for All to Loaves and Fishes Food Bank. Greenville had one YF&R member compete in the Discussion Meet and two other YF&R members compete in the Excellence in Agriculture competition this year at the YF&R competitions at the SCFB Annual Meeting.

Greenville County donated to and had several members attend the 2018 South Greenville Fair.

Edwin Terry participated in Cherrydale Elementary Harvest Day where he took a calf to interact with students. They were also able to experience the SCFB Ag Simulator.

The Pickens County Annual Membership Appreciation BBQ had a turnout of around 450 people, where members were able to fellowship.

The Saluda County Farm Bureau held its first ever State and Local Government Officeholders Appreciation Breakfast at the Persimmon Hill Golf Club. State legislators, county council members, school board members, mayors and sheriffs were invited to enjoy breakfast and could visit with members. Sen. Shane Massey and Rep. Cal Forrest were in attendance and are looking forward to the 2019 Legislative Breakfast.